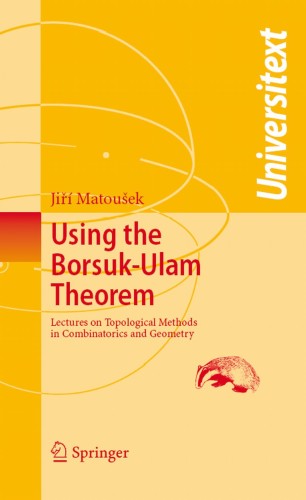 Lectures on Topological Methods in Combinatorics and Geometry

"The "Kneser conjecture" -- posed by Martin Kneser in 1955 in the Jahresbericht der DMV -- is an innocent-looking problem about partitioning the k-subsets of an n-set into intersecting subfamilies. Its striking solution by L. Lovász featured an unexpected use of the Borsuk-Ulam theorem, that is, of a genuinely topological result about continuous antipodal maps of spheres.

Matousek's lively little textbook now shows that Lovász' insight as well as beautiful work of many others (such as Vrecica and Zivaljevic, and Sarkaria) have opened up an exciting area of mathematics that connects combinatorics, graph theory, algebraic topology and discrete geometry. What seemed like an ingenious trick in 1978 now presents itself as an instance of the "test set paradigm": to construct configuration spaces for combinatorial problems such that coloring, incidence or transversal problems may be translated into the (non-)existence of suitable equivariant maps.

The vivid account of this area and its ramifications by Matousek is an exciting, a coherent account of this area of topological combinatorics. It features a collection of mathematical gems written with a broad view of the subject and still with loving care for details. Recommended reading! […]"