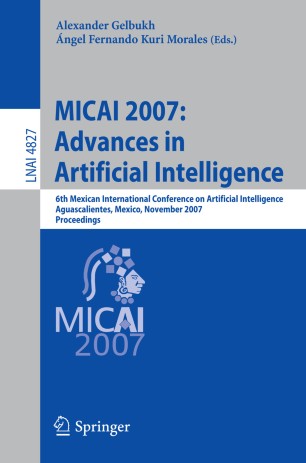 Artificial Intelligence is a branch of computer science that studies heuristic methods of solving complex problems. Historically the first such tasks modeled human intellectual activity: reasoning, learning, seeing and speaking. Later similar methods were extended to super-complex optimization problems that appear in science, social life and industry. Many methods of Artificial Intelligence are borrowed from nature, where there occur similar super-complex problems such as those related to survival, development, and behavior of living organisms. The Mexican International Conference on Artificial Intelligence (MICAI), a yearly international conference series organized by the Mexican Society for Artificial Intelligence (SMIA), is a major international AI forum and the main event in the academic life of the country’s growing AI community. The proceedings of the previous MICAI events were published by Springer in its Lecture Notes in Artificial Intelligence (LNAI) series, vol. 1793, 2313, 2972, 3789, and 4293. Since its foundation in 2000, the conference has shown a stable growth in popularity (see Figures 1 and 3) and improvement in quality (see Fig. 2). The 25% acceptance rate milestone was passed for the first time this year.