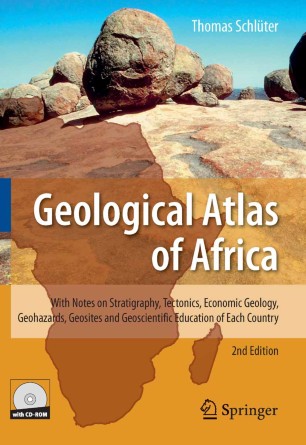 With Notes on Stratigraphy, Tectonics, Economic Geology, Geohazards, Geosites and Geoscientific Education of Each Country

T is atlas is intended primarily for anybody who is in-some background for the arrangement of how the terested in basic geology of Africa. Its originality lies atlas was done. T e second chapter is devoted to the in the fact that the regional geology of each African history of geological mapping in Africa, necessary nation or territory is reviewed country-wise by maps for a fuller appreciation of why this work in Africa is and text, a view normally not presented in textbooks worth doing. Chapter 3 provides an executive s- of regional geology. It is my belief, that there has long mary on the stratigraphy and tectonics of Africa as a been a need in universities and geological surveys, whole, i. e. in the context of no political boundaries. both in Africa and in the developed world, for sum- T e main part of the atlas lies in Chapter 4, where in marizing geological maps and an accompanying basic alphabetical order each African country or territory text utilising the enormous fund of knowledge that is presented by a digitized geological overview map has been accumulated since the beginning of geologi- and an accompanying text on its respective strat- th cal research in Africa in the mid-19 century. I hope raphy, tectonics, economic geology, geohazards and that, in part, the present atlas may satisfy this need. geosites. A short list of relevant references is also a- ed.