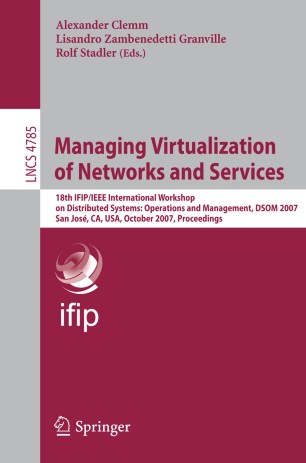 Managing Virtualization of Networks and Services

This volume of the Lecture Notes in Computer Science series contains all papers th accepted for presentation at the 18 IFIP/IEEE International Workshop on Distributed Systems: Operations and Management (DSOM 2007), which was held in the heart of Silicon Valley, San Jose, California, USA, on October 29–31, 2007. DSOM 2007 was the 18th event in a series of annual workshops. It followed in the footsteps of previous successful meetings, the most recent of which were held in Dublin, Ireland (DSOM 2006), Barcelona, Spain (DSOM 2005), Davis, California, USA (DSOM 2004), Heidelberg, Germany (DSOM 2003), and Montreal, Canada (DSOM 2002). The goal of the DSOM workshops is to bring together researchers from industry and academia working in the areas of networks, systems, and service management, to discuss recent advances and foster future growth. In contrast to the larger management conferences, such as IM (Integrated Network Management) and NOMS (Network Operations and Management Symposium), DSOM workshops have a single-track program in order to stimulate more intense interaction among participants.