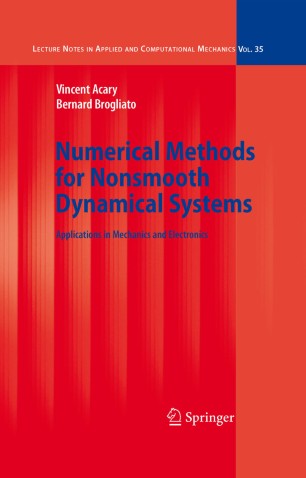 Applications in Mechanics and Electronics

This book concerns the numerical simulation of dynamical systems whose trajectories may not be differentiable everywhere. They are named nonsmooth dynamical systems. They make an important class of systems, firstly because of the many applications in which nonsmooth models are useful, secondly because they give rise to new problems in various fields of science. Usually nonsmooth dynamical systems are represented as differential inclusions, complementarity systems, evolution variational inequalities, each of these classes being itself split into several subclasses.

With detailed examples of multibody systems with contact, impact and friction and electrical circuits with piecewise linear and ideal components, the book is is mainly intended for researchers in Mechanics and Electrical Engineering, but it will be attractive to researchers from other scientific communities like Systems and Control, Robotics, Physics of Granular Media, Civil Engineering, Virtual Reality, Haptic Systems, Computer Graphics, etc.