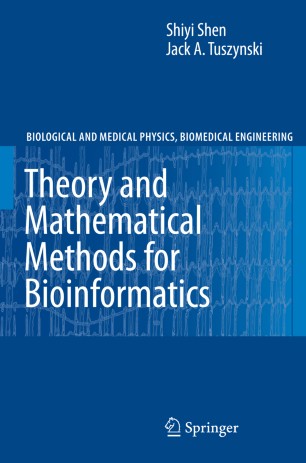 Theory and Mathematical Methods for Bioinformatics

This monograph addresses, in a systematic and pedagogical manner, the mathematical methods and the algorithms required to deal with the molecularly based problems of bioinformatics. The book will be useful to students, research scientists and practitioners of bioinformatics and related fields, especially those who are interested in the underlying mathematical methods and theory. Among the methods presented in the book, prominent attention is given to pair-wise and multiple sequence alignment algorithms, stochastic models of mutations, modulus structure theory and protein configuration analysis. Strong links to the molecular structures of proteins, DNA and other biomolecules and their analyses are developed. In particular, for proteins an in-depth exposition of secondary structure prediction methods should be a valuable tool in both molecular biology and in applications to rational drug design. The book can also be used as a textbook and for this reason most of the chapters include exercises and problems at the level of a graduate program in bioinformatics.

Professor (from 07/1993 until present). Department of Physics, University of Alberta