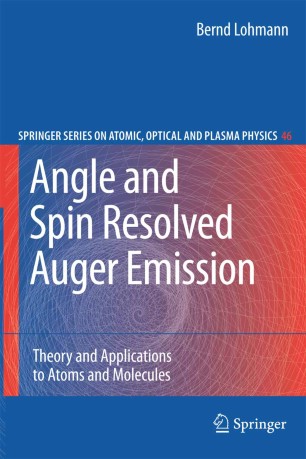 Theory and Applications to Atoms and Molecules

The Auger effect must be interpreted as the radiationless counterpart of photoionization and is usually described within a two-step model. Angle and spin resolved Auger emission physics deals with the theoretical and numerical description, analysis and interpretation of such types of experiments on free atoms and molecules. This monograph derives the general theory applying the density matrix formalism and, in terms of irreducible tensorial sets, so called state multipoles and order parameters, for parameterizing the atomic and molecular systems, respectively. Propensity rules and non-linear dependencies between the angular distribution and spin polarization parameters are included in the discussion. The numerical approaches utilizing relativistic distorted wave (RDWA), multiconfigurational Dirac-Fock (MCDF), and Greens operator methods are described. These methods are discussed and applied to theoretical predictions, numerical results and experimental data for a variety of atomic systems, especially the rare gases, and to simple molecules. The book was written for graduate and post-graduate students and researchers working in this field and/or trying to get a closer insight into the theoretical description of multistep scattering processes in atomic and molecular physics.