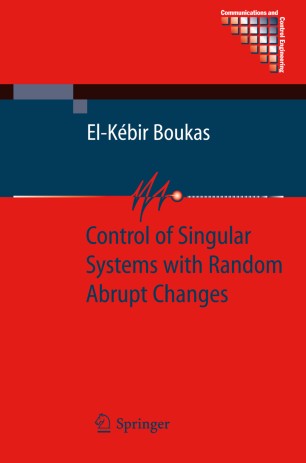 This book deals with the class of singular systems with random abrupt changes also known as singular Markovian jump systems. Many problems like stochastic stability, stochastic stabilization using state feedback control and static output control, Hinfinity control, filtering, guaranteed cost control and mixed H2/Hinfinity control and their robustness are tackled. Control of singular systems with abrupt changes examines both the theoretical and practical aspects of the control problems treated in the volume from the angle of the structural properties of linear systems.

The theory presented in the different chapters of the volume are applied to examples to show the usefulness of the theoretical results. Control of singular systems with abrupt changes is an excellent textbook for graduate students in robust control theory and as a reference for academic researchers in control or mathematics with interest in control theory. The reader should have completed first-year graduate courses in probability, linear algebra, and linear systems. It will also be of great value to engineers practising in fields where the systems can be modeled by singular systems with random abrupt changes.