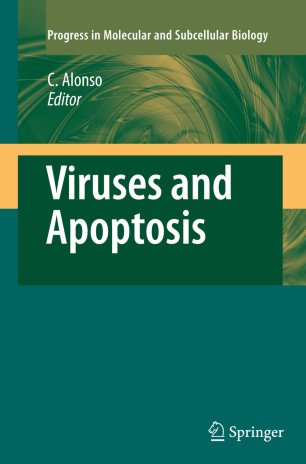 Part of the Progress in Molecular and Subcellular Biology book series (PMSB, volume 36)

The pathogenesis of viral infections involves dynamic interactions between viruses and hosts,which can result in different outcomes including cell death, elimination of the virus or latent infection.Viruses deliver genomes and p- teins with signaling potential into target cells, resulting in growth, prolife- tion and apoptosis.Viral infection modi?es key cell regulatory elements involved in apoptotic pathways to successfully accomplish viral replication despite the toxicity of viral products and the immune response elicited against the virus.Also,the interplay between virus-induced apoptosis and cell survival is mediated by an accurate balance between pro-death and anti-apoptotic signals triggered by cellular and viral proteins.Hence,viral survival products causing a delay in the completion of apoptotic process can be critical in the replication and propagation of viruses. Viral control of apoptosis can be a double-edged sword.In some viral inf- tions, immune cell apoptosis will contribute to pathogenesis and determine disease evolution either by direct infection of immune cells or as a result of bystander cell apoptosis caused by viral proteins or mediators secreted from infected cells. The apoptotic mechanisms contributing to HIV pathogenesis, the functional consequences on the immune system and the effect of antiviral therapies on this process will be reviewed in depth in this Volume.