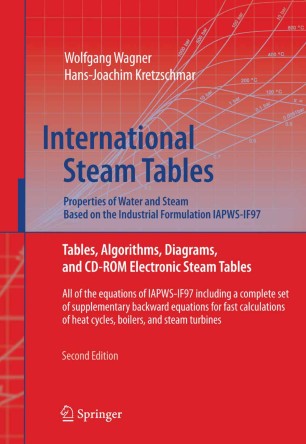 This book contains steam tables for industrial use that have been calculated using the international standard for the thermodynamic properties of water and steam, the IAPWS-IF97 formulation, and the international standards for transport and other properties. In addition, the complete set of equations of IAPWS-IF97 is presented including all supplementary backward equations adopted by IAPWS between 2001 and 2005 for fast calculations of heat cycles, boilers, and steam turbines. It is the first time that such a steam table contains the following features:
Formulas to calculate from IAPWS-IF97 arbitrary partial derivatives of the eight most important properties; this is very helpful in non-stationary process modelling.
Inclusion of the specific enthalpy and enthalpy differences into the uncertainty values of IPWS-IF97 regarding the most important properties.
Pressure-temperature diagrams with isolines of all properties contained in the steam tables and further properties.
Moreover, a Molier h-s diagram and a T-s diagram are enclosed as full-colour wall charts in A1-format.

Wolfgang Wagner is Professor of Thermodynamics at the Ruhr-University Bochum in the position of a chair. His efforts in the scientific working field cover the thermophysical properties of fluids (gases and liquids), in particular the multiparameter equations of state and highly-accurate density measurements over large ranges of temperature, pressure, and density. His research works have resulted in more than 150 publications including three books.
Prof. Wagner is an active member of the International Association of the Properties of Water and Steam (IAPWS). Under his supervision, the "IAPWS Formulation 1995 for the Thermodynamic Properties of Ordinary Water Substance for General and Scientific Use" (IAPWS-95) and the "IAPWS Industrial Formulation 1997 for the Thermodynamic Properties of Water and Steam" (IAPWS-IF97) were developed.
In 1998 he received the Honorary Fellow Award of IAPWS and in 2003 the Yeram S. Touloukian Award of the American Society of Mechanical Engineers (ASME) for outstanding technical contributions in the field of thermophysical properties.

Hans-Joachim Kretzschmar is Professor of Technical Thermodynamics at the Zittau/ Goerlitz University of Applied Sciences and specializes in the calculation of the properties for working fluids in heat cycles, boilers, and turbines. The property libraries for water and steam, humid air, and humid combustion gases developed by his group are used worldwide in more than 140 companies, universities, and other institutions.
Prof. Kretzschmar is an active member of the International Association for the Properties of Water and Steam (IAPWS) and Vice Chairman of the IAPWS Working Group on "Thermophysical Properties of Water and Steam" (TPWS). As such, he was involved in the development of the industrial standard IAPWS-IF97.
As chairman of the Task Group on "Supplementary Backward Equations for the Industrial Formulation IAPWS-IF97" he has coordinated the development of further backward equations for thermodynamic process modelling. His research group in Zittau developed the supplementary standards IAPWS-IF97-S01, -S03 and -S04.