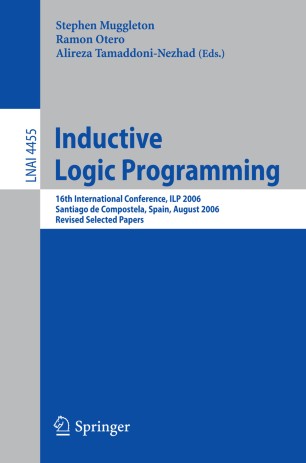 The inherent dangers of change are often summed up in the misquoted Chinese curse “May you live in interesting times.” The submission procedure for the 16th International Conference of Inductive Logic Programming (ILP 2006) was a radical (hopefully interesting but not cursed) departure from previous years. Submissions were requested in two phases. The ?rst phase involved submission of short papers (three pages) which were then presented at the conference and included in a short papers proceedings. In the second phase, reviewers selected papersforlongpapersubmission(15pagesmaximum).Thesewerethenassessed by the same reviewers, who then decided which papers to include in the journal special issue and proceedings. In the ?rst phase there were a record 77 papers, comparedto the usual20 orso long papersofpreviousyears.Eachpaper was- viewed by three reviewers. Out of these, 71 contributors were invited to submit long papers. Out of the long paper submissions, 7 were selected for the - chine Learning Journal special issue and 27 were accepted for the proceedings. In addition, two papers were nominated by Program Committee referees for the applications prize and two for the theory prize. The papers represent the div- sity and vitality in present ILP research including ILP theory, implementations, search and phase transition, distributed and large-scale learning, probabilistic ILP, biological applications, natural language learning and planning and action learning.