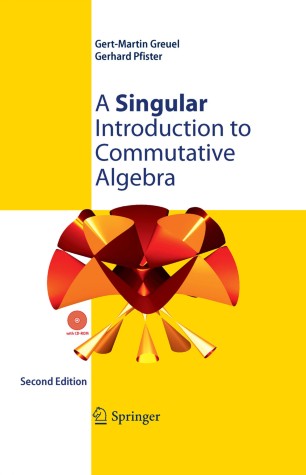 A Singular Introduction to Commutative Algebra

From the reviews:
"…It is certainly no exaggeration to say that Greuel and Pfister's A Singular Introduction to Commutative Algebra aims to lead a further stage in the computational revolution in commutative algebra, in which computational methods and results become central to how the subject is taught and learned. […] Among the great strengths and most distinctive features of Greuel and Pfister's book is a new, completely unified treatment of the global and local theories. The realization that the two cases could be combined to this extent was decisive in the design of the Singular system, making it one of the most flexible and most efficient systems of its type. The authors present the first systematic development of this unified approach in a textbook here, and this aspect alone is almost worth the price of admission. Another distinctive feature of this book is the degree of integration of explicit computational examples into the flow of the text. Strictly mathematical components of the development (often quite terse and written in a formal "theorem-proof" style) are interspersed with parallel discussions of features of Singular and numerous Singular examples giving input commands, some extended programs in the Singular language, and output. […] Yet another strength of Greuel and Pfister's book is its breadth of coverage of theoretical topics in the portions of commutative algebra closest to algebraic geometry, with algorithmic treatments of almost every topic. A synopsis of the table of contents will make this clear. […] Greuel and Pfister have written a distinctive an highly useful book that should be in the library of every commutative algebrais and algebraic geometer, expert and novice alike. I hope that it achieves the educational impact it deserves."
John B. Little, Monthly of The Mathematical Association of America, March 2004
"... The authors' most important new focus is the presentation of non-well orderings that allow them the computational approach for local commutative algebra.
In fact the book provides an introduction to commutative algebra from a computational point of view. So it might be helpful for students and other interested readers (familiar with computers) to explore the beauties and difficulties of commutative algebra by computational experiences. In this respect the book is the one of the first samples of a new kind of textbooks in algebra."
P.Schenzel, Zentralblatt für Mathematik 1023.13001, 2003