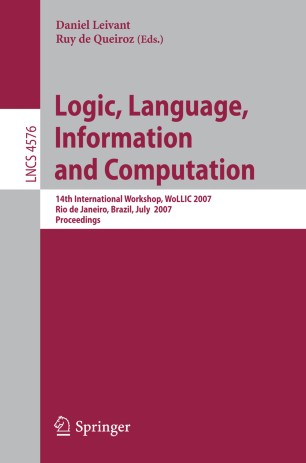 Welcome to the proceedings of the 14th WoLLIC meeting, which was held in Rio de Janeiro, Brazil, July 2 - 5, 2007. The Workshop on Logic, Language, Information and Computation (WoLLIC) is an annual international forum on inter-disciplinary research involving formal logic, computing and programming theory, and natural language and reasoning. The WoLLIC meetings alternate between Brazil (and Latin America) and other countries, with the aim of fostering interest in applied logic among Latin Am- ican scientists and students, and facilitating their interaction with the international - plied logic community. WoLLIC 2007 focused on foundationsof computing and programming,novel c- putation models and paradigms, broad notions of proof and belief, formal methods in software and hardware development; logical approaches to natural language and r- soning; logics of programs, actions and resources; foundational aspects of information organization, search, ?ow, sharing, and protection. The Program Committee for this meeting, consisting of the 28 colleagues listed here, was designed to promote these inter-disciplinary and cross-disciplinary topics. Like its predecessors, WoLLIC 2007 included invited talks and tutorials as well as contributed papers. The Program Committee received 52 complete submissions (aside from 15 preliminary abstracts which did not materialize). A thorough review process by the Program Committee, assisted by over 70 external reviewers, led to the acc- tance of 21 papers for presentation at the meeting and inclusion in these proceedings. The conference program also included 16 talks and tutorials by 10 prominent invited speakers, who graciously accepted the Program Committee’s invitation.