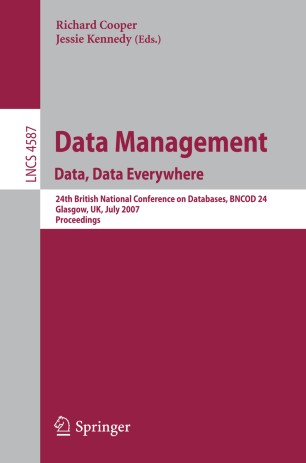 BNCOD has, for the past 27 years, provided a forum for researchers world-wide to gather to discuss the topical issues in databaseresearch.As the researchch- lenges have evolved, so BNCOD has changed its topics of interest accordingly, now covering data management more widely. In doing so, it has evolved from a local conference mostly attended by British researchers to a truly international conference that happens to be held in Britain. This year, for instance, sign- cantly less than half of the presentations are from UK or Irish authors, other contributions coming from continental Europe, Asia and the USA. Currently, one of the most pressing challenges is to ?nd ways of evolving database technology to cope with its new role in underpinning the massively distributed and heterogeneous applications built on top of the Internet. This has a?ected both the ways in which data has been accessed and the ways in which it is represented, with XML data management becoming an important issue and, as such, heavily represented at this conference. It has also brought back issues of performance that might have been considered largely solved by the improvements in hardware, since data now has to be managed on devices of low power and small memory as well as on standard client and powerful server machines. We therefore invited papers on all aspects of data management, particularly relatedtohowdataisusedintheubiquitousenvironmentofthemodernInternet bycomplexdistributedandscienti?capplications.Ofthe56submissionsfrom14 countriesweselected15fullpapers,3shortpapersand7postersforpresentation, all of which appear in this volume along with 2 invited papers.