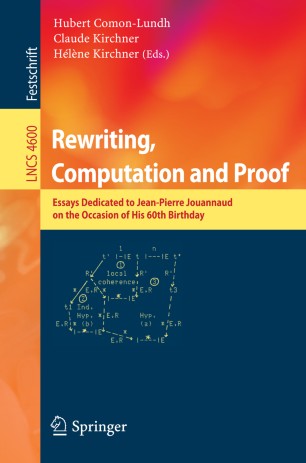 Jean-Pierre Jouannaud has deeply influenced, and is still influencing, research in Informatics, through the many important results he has produced in various research fields and through the generations of scholars he has educated. He has played a leading role in field of rewriting and its technology, advancing the research areas of unification, rewriting and completion modulo, conditional rewriting, termination proofs, modular properties, and automated proofs by induction in rewrite theories. Following his strong interest for algebraic specification languages and their efficient implementation, Jean-Pierre Jouannaud has contributed to the design, semantics and implementation of OBJ2 and has recently augmented the Maude rewriting logic system with an essential feature: membership equational logic. He was a member of the CNU (National University Council) and a member of the CNRS national committee. He is now heading with great success the computer science laboratory at the Ecole Polytechnique thus showing his exceptional qualities as a research team manager and supervisor of students.

This Festschrift volume, published to honor Jean-Pierre Jouannaud on his 60th Birthday on May 12, 2007, includes 13 refereed papers by leading researchers, current and former colleagues, who congregated at a celebratory symposium held in Cachan near Paris, France, on June 21-22, 2007. The papers are grouped in thematic sections on Rewriting Foundations, Proof and Computation, and a final section entitled Towards Safety and Security.