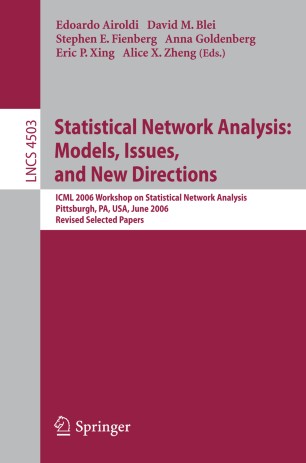 This volume was prepared to share with a larger audience the exciting ideas and work presented at an ICML 2006 workshop of the same title. Network models have a long history. Sociologists and statisticians made major advances in the 1970s and 1980s, culminating in part with a number of substantial databases and the class of exponential random graph models and related methods in the early 1990s. Physicists and computer scientists came to this domain cons- erably later, but they enriched the array of models and approaches and began to tackle much larger networks and more complex forms of data. Our goal in organ- ing the workshop was to encourage a dialog among people coming from di?erent disciplinary perspectives and with di?erent methods, models, and tools. Both the workshop and the editing of the proceedings was a truly colla- rative e?ort on behalf of all six editors, but three in particular deserve special recognition. Anna Goldenberg and Alice Zheng were the driving force behind the entire enterprise and Edo Airoldi assisted on a number of the more important arrangements.