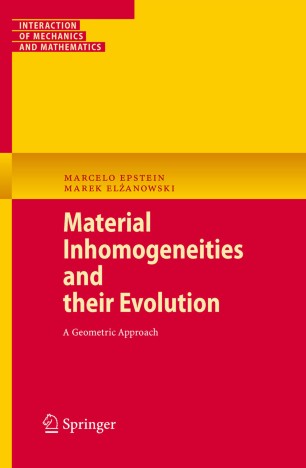 Material Inhomogeneities and their Evolution

Inhomogeneity theory is of importance for the description of a variety of material phenomena, including continuous distributions of dislocations, fracture mechanics, plasticity, biological remodelling and growth and, more generally, all processes that entail changes in the material body driven by forces known in literature as material or configurational. This monograph presents a unified treatment of the theory using some of the tools of modern differential geometry. The first part of the book deals with the geometrical description of uniform bodies and their homogeneity (i.e., integrability) conditions. In the second part, a theory of material evolution is developed and its relevance in various applied contexts discussed. The necessary geometrical notions are introduced as needed in the first two parts but often without due attention to an uncompromising mathematical rigour. This task is left for the third part of the book, which is a highly technical compendium of those concepts of modern differential geometry that are invoked in the first two parts (differentiable manifolds, Lie groups, jets, principal fibre bundles, G-structures, connections, frame bundles, integrable prolongations, groupoids, etc.). To make the text as useful as possible to active researchers and graduate students, considerable attention has been devoted to non-standard topics, such as second-grade materials, Cosserat media and functionally graded bodies.