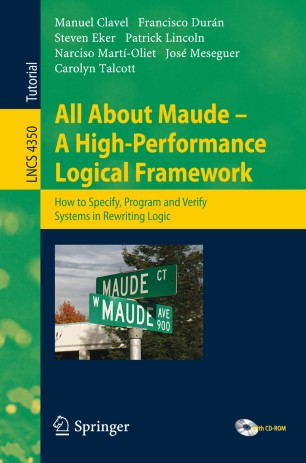 All About Maude - A High-Performance Logical Framework

How to Specify, Program and Verify Systems in Rewriting Logic

This book gives a comprehensive account of Maude, a language and system based on rewriting logic. Many examples are used throughout the book to illustrate the main ideas and features of Maude, and its many possible uses. Maude modules are rewrite theories. Computation with such modules is - cient deduction by rewriting. Because of its logical basis and its initial model semantics,aMaudemodulede?nesaprecisemathematicalmodel.Thismeans that Maude and its formal tool environment can be used in three, mutually reinforcing ways: • as a declarative programming language; • as an executable formal speci?cation language; and • as a formal veri?cation system. Maude’s rewriting logic is simple, yet very expressive. This gives Maude good representational capabilities as a semantic framework to formally represent a wide range of systems, including models of concurrency, distributed al- rithms, network protocols, semantics of programming languages, and models of cell biology. Rewriting logic is also an expressive universal logic,making Maude a ?exible logical framework in which many di?erent logics and - ference systems can be represented and mechanized. This makes Maude a useful metatool to build many other tools, including those in its own formal tool environment. Thanks to the logic’s simplicity and the use of advanced semi-compilation techniques, Maude has a high-performance implementation, making it competitive with other declarative programming languages.