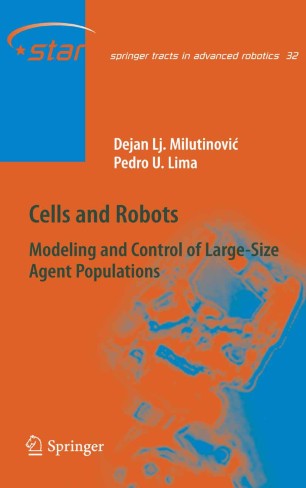 Cells and Robots is an outcome of the multidisciplinary research extending over Biology, Robotics and Hybrid Systems Theory. It is inspired by modeling reactive behavior of the immune system cell population, where each cell is considered as an independent agent. In our modeling approach, there is no difference if the cells are naturally or artificially created agents, such as robots. This appears even more evident when we introduce a case study concerning a large-size robotic population scenario. Under this scenario, we also formulate the optimal control of maximizing the probability of robotic presence in a given region and discuss the application of the Minimum Principle for partial differential equations to this problem. Simultaneous consideration of cell and robotic populations is of mutual benefit for Biology and Robotics, as well as for the general understanding of multi-agent system dynamics.

The text of this monograph is based on the PhD thesis of the first author. The work was a runner-up for the fifth edition of the Georges Giralt Award for the best European PhD thesis in Robotics, annually awarded by the European Robotics Research Network (EURON).