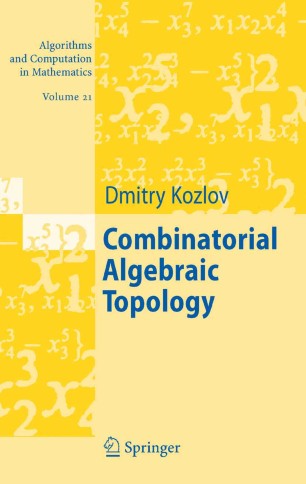 Part of the Algorithms and Computation in Mathematics book series (AACIM, volume 21)

Combinatorial algebraic topology is a fascinating and dynamic field at the crossroads of algebraic topology and discrete mathematics. This volume is the first comprehensive treatment of the subject in book form. The first part of the book constitutes a swift walk through the main tools of algebraic topology, including Stiefel-Whitney characteristic classes, which are needed for the later parts. Readers - graduate students and working mathematicians alike - will probably find particularly useful the second part, which contains an in-depth discussion of the major research techniques of combinatorial algebraic topology. Our presentation of standard topics is quite different from that of existing texts. In addition, several new themes, such as spectral sequences, are included. Although applications are sprinkled throughout the second part, they are principal focus of the third part, which is entirely devoted to developing the topological structure theory for graph homomorphisms. The main benefit for the reader will be the prospect of fairly quickly getting to the forefront of modern research in this active field.