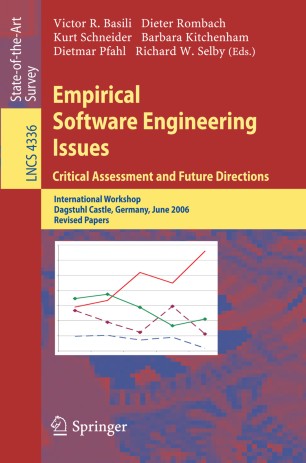 Victor R. Basili, Dieter Rombach, and Kurt Schneider Introduction In 1992, a Dagstuhl seminar was held on “Experimental Software Engineering Issues” (seminar no. 9238). Its goal was to discuss the state of the art of empirical software engineering (ESE) by assessing past accomplishments, raising open questions, and proposing a future research agenda. Since 1992, the topic of ESE has been adopted more widely by academia as an interesting and promising research topic, and in industrial practice as a necessary infrastructure technology for goal-oriented, sustained process improvement. At the same time, the spectrum of methods applied in ESE has broadened. For example, in 1992, the empirical methods applied in software engineering were basically restricted to quantitative studies (mostly controlled experiments), whereas since then, a range of qualitative methods have been introduced, from observational to ethnographical studies. Thus, the field can be said to have moved from experimental to empirical software engineering. We believe that it is now time to again bring together practitioners and researchers to identify both the progress made since 1992 and the most important challenges for the next five to ten years.