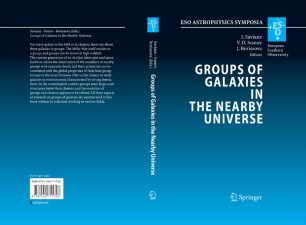 Groups of Galaxies in the Nearby Universe

Proceedings of the ESO Workshop held at Santiago de Chile

For every galaxy in the field or in clusters, there are about three galaxies in groups. The Milky Way itself resides in a group, and groups can be found at high redshift. The current generation of 10-m class telescopes and space facilities allows the observation of the members of nearby groups with exquisite detail, and their properties can be correlated with the global properties of their host group. Groups in the local Universe offer us the chance to study galaxies in environments characterized by strong interactions. In the cosmological context, groups trace large-scale structures better than clusters, and the evolution of groups and clusters appears to be related. All these aspects of research on groups of galaxies are summarized in this book written by scientists working in various fields.