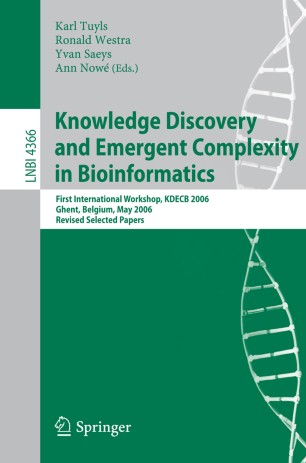 This book contains selected and revised papers of the International Symposium on Knowledge Discovery and Emergent Complexity in Bioinformatics (KDECB 2006), held at the University of Ghent, Belgium, May 10, 2006. In February 1943, the Austrian physicist Erwin Schrodi ¨ nger, one of the founding fathers of quantum mechanics, gave a series of lectures at Trinity College in Dublin titled “What Is Life? The Physical Aspect of the Living Cell and Mind. ” In these l- tures Schrodi ¨ nger stressed the fundamental differencesencountered between observing animate and inanimate matter, and advanced some, at the time, audacious hypotheses aboutthe nature andmolecularstructureof genes, some ten yearsbeforethe discoveries of Watson and Crick. Indeed, the rules of living matter, from the molecular level to the level of supraorganic ocking behavior, seem to violate the simple basic interactions found between fundamental particles as electrons and protons. It is as if the organic molecules in the cell ‘know’ that they are alive. Despite all external stochastic uct- tions and chaos, process and additive noise, this machinery has been ticking for at least 3. 8 billion years. Yet, we may safely assume that the laws that governphysicsalso steer these complex associations of synchronous and seemingly intentional dynamics in the cell.