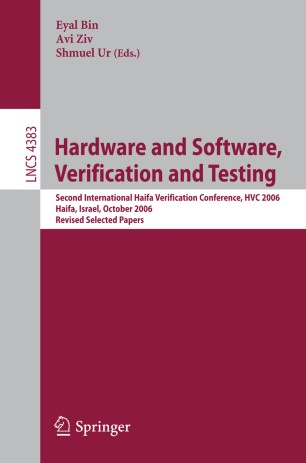 Hardware and Software, Verification and Testing

The Haifa Verification Conference 2006 took place for the second year in a row at the IBM Haifa Research Lab and at the Haifa University in Israel during October 23–26, 2006. The verification conference was a three-day, single-track conference followed by a one-day tutorial on PSL. This Haifa Verification Conference was established to bring together researchers from two different disciplines, hardware verification and software testing. The use of similar techniques among the two communities enabled the conference to help generate a unique synergy that fortifies both groups. This year, we had two traditional tracks, hardware verification and software testing, in addition to a new track dedicated to tools in these areas. The conference emphasized applicability to real-world challenges, which was vital to the many attendees coming from industry. The conference hosted two internationally recognized individuals as keynote speakers. Randal E. Bryant, Dean and University Professor from the School of Computer Science at Carnegie Mellon University gave a talk on “System Modeling and Formal Verification with UCLID” and Michael Jackson from the University of Newcastle gave a talk on “Testing the Machine in the World. ” The numerous invited speakers presented topics of great interest to the audience. Just some of these outstanding speakers included Cindy Eisner in the hardware verification track, Alon Gluska and Andrew Piziali in the tools track, and Mauro Pezze and Nir Shavit in the software testing track.