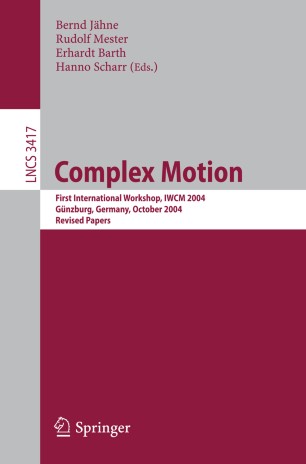 The world we live in is a dynamic one: we explore it by moving through it, and many of the objects which we are interested in are also moving. Tra?c, for instance, is an example of a domain where detecting and processing visual motion is of vital interest, both in a metaphoric as well as in a purely literal sense. Visual communication is another important example of an area of science which is dominated by the need to measure, understand, and represent visual motion in an e?cient way. Visual motion is a subject of research which forces the investigator to deal withcomplexity;complexityinthesenseoffacinge?ectsofmotioninaverylarge diversity of forms, starting from analyzing simple motion in a changing envir- ment (illumination, shadows, . . . ), under adverse observation conditions, such as bad signal-to-noiseratio (low illumination, small-scaleprocesses, low-dosex-ray, etc. ), covering also multiple motions of independent objects, occlusions, and - ing as far as dealing with objects which are complex in themselves (articulated objects such as bodies of living beings). The spectrum of problems includes, but does not end at, objects which are not ‘bodies’ at all, e. g. , when anal- ing ?uid motion, cloud motion, and so on. Analyzing the motion of a crowd in a shopping mall or in an airport is a further example that implies the need to struggleagainsttheproblemsinducedbycomplexity.