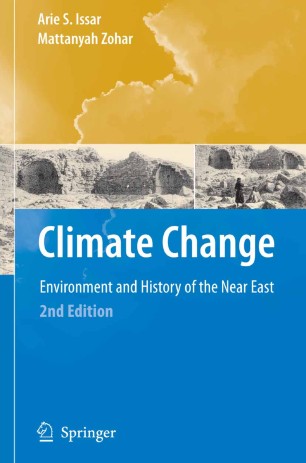 Environment and History of the Near East

When the ?rst edition of this book was published in 2004, the following year 2005 has happened to have been the warmest year since 1880, when the ?rst reliable worldwide instrumental records came into existance. Claiming no li- age between the publication of our book and the temperature record, yet this record demonstrates the trend of increase in the global surface temperatures during thepast20years,reinforcedbyevidenceofriseofatmosphere’sand oceans’ temperatures, and increased melting of ice and snow in the arctic and antarctic regions as well as on mountain tops. All these observations are par- leled by the increase in the quantity of heat trapping gases in the atmosphere, causing most probably, the global greenhouse effect. In order to try and predict, what might be the impact of this effect on the on the natural and human environments of the Near East, (Figs. 1–1d) the authors adopted the saying that the past is the key for the future. The practical conclusion of this principle says that the acquiring knowledge of the impact of past climate changes on the nature and human societies, may allow conclusions with regard to future possible impact of climate changes. By correlating proxy data of all types, paleo-sea and lake levels, paleo-hydrology, pollen pro?les, environmental isotopes as well as archaeological and historical documents, the authors tried to collect as much as possible of this knowledge.