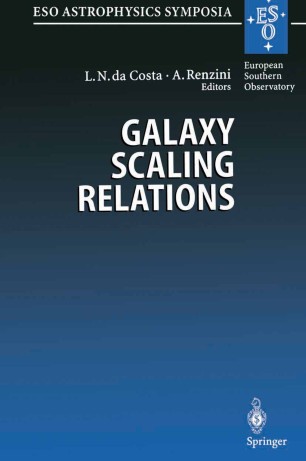 Proceedings of the ESO Workshop Held at Garching, Germany, 18–20 November 1996

This book is part of the ESO conference series meant to survey the current status of different areas of astronomical research and explore science opportunities with the European Very Large Telescope (VLT). The research presented focuses on the origins, evolution and applications of galaxy scaling relations. Reviews of the properties and scaling relations of local galaxies and several reports of recent results from observations of high redshift galaxies using the Hubble Space Telescope and the Keck Telescope are also included. Current theoretical efforts to explain the origin of the observed scaling relations and the contraints imposed by the new data, as well as the use of galaxy--galaxy lensing to probe the scaling properties of dark matter halos are investigated. The book includes contributions that consider the use of the scaling relations to measure distance of galaxies and map the peculiar velocity field of galaxies in the nearby universe, as well as the constraints imposed on cosmological models from the analysis of cosmic flows.