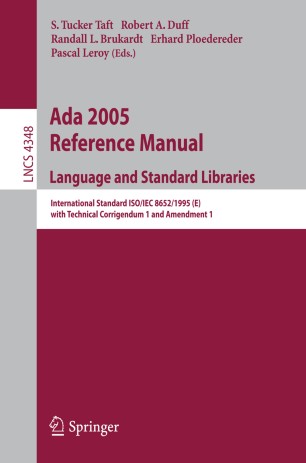 The Ada 2005 Reference Manual combines the International Standard ISO/IEC 8652/1995(E) for the programming language Ada with the corrections of the Technical Corrigendum 1 approved by ISO in February 2001 and with the Amendment 1 expected to be approved by ISO in late 2006 or early 2007. Both the Technical Corrigendum 1 and the Amendment 1 list only the changes made to the International Standard.

The Ada 2005 Reference Manual incorporates these changes in the overall standard text and thus will replace the former versions as an indispensable working companion for anybody using Ada professionally or learning and studying the language systematically. In naming this version, we have chosen the vernacular term Ada 2005 used by the Ada community to refer to the interesting extensions made to the language Ada by the Amendment 1.