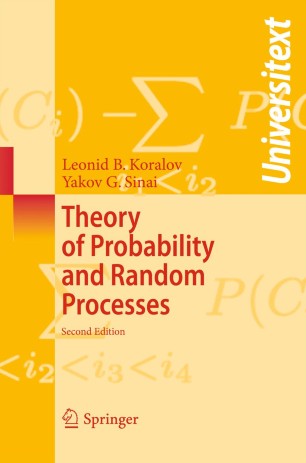 Theory of Probability and Random Processes

A one-year course in probability theory and the theory of random processes, taught at Princeton University to undergraduate and graduate students, forms the core of the content of this book

This material is essential to many undergraduate and graduate courses. The book can also serve as a reference for scientists using modern probability theory in their research.

YAKOV SINAI has been a professor at Princeton University since 1993. He was educated at Moscow State University, and was a professor there till 1993.
Since 1971 he has also held the position of senior researcher at the Landau Institute of Theoretical Physics. He is known for fundamental work on dynamical systems, probability theory, mathematical physics, and statistical mechanics. He has been awarded, among other honors, the Boltzmann Medal (in 1986) and Wolf Prize in Mathematics (in 1997). He is a member of Russian and American Academies of Sciences.

LEONID KORALOV is an assistant professor at the University of Maryland. From 2000 till 2006 he was an assistant professor at Princeton University, prior to which he worked at the Institute for Advanced Study in Princeton. He did his undergraduate work at Moscow State University, and got his PhD from SUNY at Stony Brook in 1998. He works on problems in the areas of homogenization, diffusion processes, and partial differential equations.

“The text is well written and the concepts and results motivated and explained. Most of the chapters include a section with exercises of varying difficulty. The material of the book has been used by the authors to teach one-year lecture courses at Princeton University and the University of Maryland to advanced undergraduate and graduate students. Summarising, the book is enjoyable and provides a concise well-motivated presentation of the material covered, suitable for lecture courses at an advanced level.” (Evelyn Buckwar, Zentralblatt MATH, Vol. 1181, 2010)