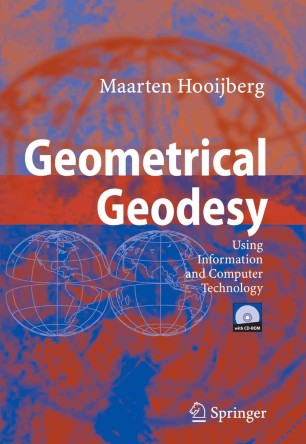 Geometrical Geodesy is a reference manual written for geodesists and scientists in the field of earth sciences. This book reviews developments in geodesy and hydrography, using a wide variety of electronic and acoustic instruments. The aim is to take stock of the latest fundamental geodetic constants for the 2000s, to focus on dissimilar ellipsoidal areas, distances, and conversion of applications, referenced to an abundant bibliography. It presents a mixture of issues, dealing with reference and time systems, datums, and s-transformations, elucidate multi-dimensional aspects of the information, communication, and computation technology, including the use of parallel computers. Stressing the hands-on methodology, the handbook is of interest to geodetic engineers, consultants, hydrographers, and engineers with an interest in the field of earth sciences.

Maarten Hooijberg studied Geodetic Engineering at the College of Advanced Technology, Utrecht, The Netherlands, and received his BSc degree in 1959. Since 1959 he has worked as a civil engineer, hydrographer and land surveyor in many countries throughout the world: Switzerland, United Kingdom, the rainforests of South-East Asia and South America, the swamps of West Africa, and the sands of the Arabian Peninsula. In 1970 Hooijberg joined the Royal Dutch Shell Group. From 1974 until 1986, he was the independent head of topographical services at Billiton International Metals in the Northern Hemisphere, and of Shell International Metals in the Southern Hemisphere. In 1986 he was appointed secretary of the office directorate of Shell International Petroleum Maatschappij in The Hague. In 1992 he retired from Royal Dutch Shell. Hooijberg has written many papers in the fields of hydrography and topography. This handbook has evolved through the author's 25 years of experience in advising and writing on geodetic methods.

"Geometrical Geodesy: Using Information and Computer Technology states that it is a reference manual for geodesists and scientists in the field of Earth sciences. … Graduate students may find it useful for course-work and research. … The 19 chapters cover what would be expected in a geodesy book … ." (Peter Dare, Geomatica, Vol. 62 (2), 2008)