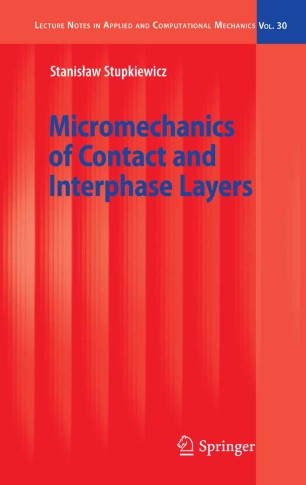 Micromechanics provides a link between the structure and the properties at different scales of observation. This book deals with micromechanical analysis of interfaces and interface layers and presents several modelling tools, ranging from the rigorous method of asymptotic expansions to practical finite element simulations, suitable for this class of problems. Two application areas are discussed. Boundary layers associated with contact of rough bodies are modelled by applying a scale transition approach in which a macroscopic interface of zero thickness is seen at the micro-scale as a layer with some finite thickness. Secondly, evolution of laminated microstructures accompanying stress-induced martensitic transformations in shape memory alloys (SMA) is analyzed as an illustration of the case when the local interfacial phenomena – here the propagation of phase transformation fronts – govern the macroscopic behaviour of a heterogeneous material. The corresponding two parts of the book are self-contained, so they can be read separately by those interested only in micromechanical modelling of contact phenomena or in modelling of pseudoelasticity and stress-induced martensitic microstructures in SMA single crystals.