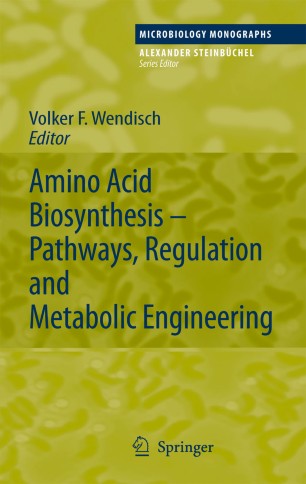 Amino Acids Biosynthesis presents the current knowledge of fundamental as well as applied microbiology of amino acids. Topics discussed are the amino acid biosynthetic pathways, their genetic and biochemical regulation, transport of amino acids and genomics of producing microorganisms. The characterization of the control mechanisms of amino acid biosynthesis has revealed insights into principles of genetic and biochemical regulation, such as transcriptional regulators and a new class of regulatory elements, the riboswitch.

The volume further deals with the metabolic engineering of microorganisms for the biotechnological production of amino acids for use as pharmaceuticals and, particularly, as food and feed additives. Comprehensive reviews are given of recent achievements to enable or improve production of amino acids and dipeptides by fermentation and enzyme catalysis. Here, the particular focus is on metabolic engineering, the rational improvement of metabolic functions using recombinant DNA technology.