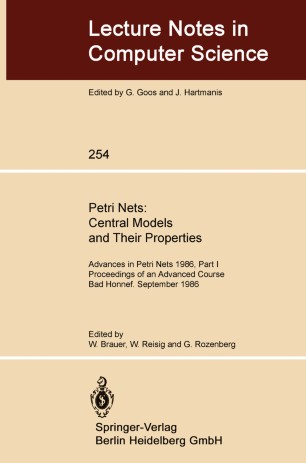 Petri Nets represent a long and sustained effort· to develop concepts, theories and tools to aid in design and analysis of concurrent systems. They are used in many areas of computer science including software engineering, data base and in­ formation systems, computer architecture and operating systems, communication protocols and computer networks, process control, and socio-technical systems such as office communication and man-machine interaction. Quite substantial theory has been developed for Petri Nets. It reflects all major problem areas of concurrent distributed systems and covers many successfully applied principles and analysis techniques for systems organisation. Since the time that C. A. Petri has presented his original ideas, a rich body of knowledge has been developed-a recent bibliography (in Advances in Petri Nets 1981) includes more than 2000 entries. Already in 1979 an Advanced Course on Petri Nets was organized in Hamburg, West Germany, aiming at systematizing the existing knowledge and making it well accessible to a wide audience of computer scientists interested in theory and applications of concurrent systems. This course has turned out to be successful in the sense that it has initiated a lot of new research into applications and theory of Petri Nets. This had led to· another Advanced Course in 1986 in Bad Honnef, West Germany - where during two weeks more than 30 lectures were presented covering the most important current developments in the area of Petri Nets.