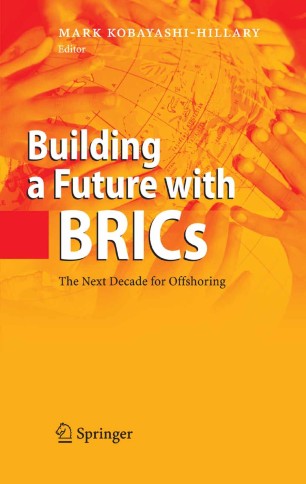 Building a Future with BRICs

The Next Decade for Offshoring

In 2003, Goldman Sachs published a startling report on the BRICs (Brazil, Russia, India, and China) region: These four countries would be larger than the G6 economics within 40 years, muscling their way to economic dominance over the coming decades, and powering past developed countries such as the United Kingdom, Germany, and Japan. This book focuses on the technology and technology-enabled services that underpin this social and economic revolution. The editor analyses the reasons why these four countries are in a unique position to lead a 21st century growth in international services. He then features 12 chapters written by the most important chief executives from the BRICs service economy. Indian technology leaders, such as Nandan Nilekani (Infosys), Shiv Nadar (HCL), and Rajendra Pawar (NIIT), feature alongside their peers from Brazil, Russia, and China outlining their views on the next decade for offshoring.