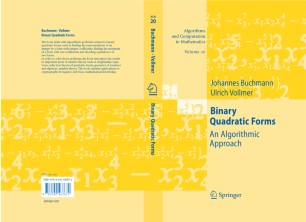 Part of the Algorithms and Computation in Mathematics book series (AACIM, volume 20)

This book deals with algorithmic problems concerning binary quadratic forms 2 2 f(X,Y)= aX +bXY +cY with integer coe?cients a, b, c, the mathem- ical theories that permit the solution of these problems, and applications to cryptography. A considerable part of the theory is developed for forms with real coe?cients and it is shown that forms with integer coe?cients appear in a natural way. Much of the progress of number theory has been stimulated by the study of concrete computational problems. Deep theories were developed from the classic time of Euler and Gauss onwards to this day that made the solutions ofmanyof theseproblemspossible.Algorithmicsolutionsandtheirproperties became an object of study in their own right. Thisbookintertwinestheexpositionofoneveryclassicalstrandofnumber theory with the presentation and analysis of algorithms both classical and modern which solve its motivating problems. This algorithmic approach will lead the reader, we hope, not only to an understanding of theory and solution methods, but also to an appreciation of the e?ciency with which solutions can be reached. The computer age has led to a marked advancement of algorithmic - search. On the one hand, computers make it feasible to solve very hard pr- lems such as the solution of Pell equations with large coe?cients. On the other, the application of number theory in public-key cryptography increased the urgency for establishing the complexity of several computational pr- lems: many a computer system stays only secure as long as these problems remain intractable.

Vollmer: Thesis and several articles on algorithms for Class Group and Regulator computation in quadratic fields.

"Quadratic Field Theory is the best platform for the development of a computer viewpoint. Such an idea is not dominant in earlier texts on quadratic forms … . this book reads like a continuous program with major topics occurring as subroutines. The theory appears as ‘program comments,’ accompanied by numerical examples. … An appendix explaining linear algebra (bases and matrices) helps make this work ideal as a self-contained well-motivated textbook for computer-oriented students at any level and as a reference book." (Harvey Cohn, Zentralblatt MATH, Vol. 1125 (2), 2008)

“The book under discussion contains the classical Gauß -Dirichlet representation theory of integral binary quadric forms. … Many of the algorithms presented in this book are described in full detail. The whole text is very carefully written. It is therefore also well suited for beginners as in addition no special knowledge on Number Theory is necessary to understand the text. It can also be recommended to teachers who give courses in Number Theory or Computational Algebra.” (J. Schoissengeier, Monatshefte für Mathematik, Vol. 156 (3), March, 2009)