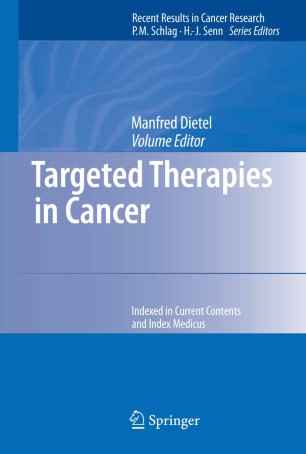 From its introduction, oncological chemotherapy has been encumbered by its poor selectivity because most antiproliferative drugs are toxic not only to tumor cells but also to important populations of the body’s non-neoplastic cells. The resultant problems with unwanted side effects are compounded by difficulties in predicting the desired effectivity of chemotherapy in individual patients.

This unsatisfactory situation has driven intensive research and development towards more specific and less toxic anticancer drugs over the last few decades. Several results of these efforts have reached the clinic and an even greater number are now in preclinical testing.

Common to all these targeted therapies is their interaction with defined molecules present on cancer cells, which adds various degrees of increased selectivity to their toxic effects. As a consequence, detecting the target molecule on tumors before therapy holds great diagnostic potential for predicting the efficacy of the drug and personalizing therapy.

This book aims to present translational scientists and clinicians with an integrated critical view on the theories, mechanisms, problems and pitfalls of the targeted therapy approach.