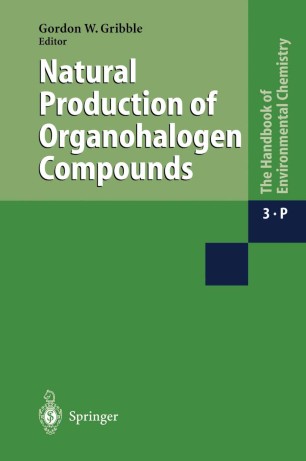 Part of the The Handbook of Environmental Chemistry book series (HEC, volume 3 / 3P)

This book summarizes the state-of-the art knowledge on naturally occurring organohalogens, of which more than 3700 are documented. The chapters cover all aspects of this field, including the structural diversity and sources of organohalogens, the mechanisms for their formation and biodegradation, the clinical use of dichloroacetate, and synthesis of the powerful anticancer chlorine-containing cryptophycin. Both biogenic and abiogenic sources of organohalogens are treated, and the latter include volcanic emissions and abiogenic formation in soil. Halogenation in humans, fungi, and in the ocean are covered in separate chapters. Sources and biosynthesis of the relatively rare natural organofluorines are also discussed in this volume. Only with a better understanding of the role nature plays in the area of organohalogens can we regulate the production, use, and disposal of man-made organohalogen compounds more intelligently .

"This is volume 3/P of the excellent collection The Handbook of Environmental Chemistry … . The present book summarizes the state-of-the-art knowledge on naturally occurring organohalogens, of which more than 3700 are documented. … The enormous advances made in our understanding of the organohalogens biosynthesis, biotransformation, and physiological roles are extensively presented in separate chapters. … Certainly, the volume contains all relevant information in this respect, following the accurate presentation and scientific rigor of previous volumes in the collection." (International Journal of Environmental Analytical Chemistry, Vol. 84 (8), 2004)