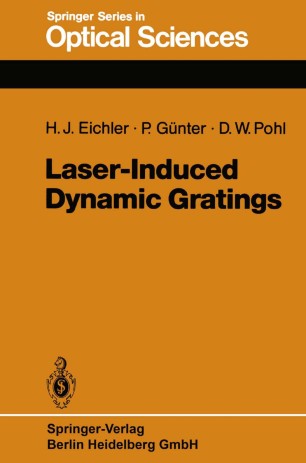 The invention ofthe laser 25years ago resulted in powerfullight sources which led to the observation of unexpected and striking phenomena. New fields of science such as holography and nonlinear optics developed constituting the basis of this volume. The classical principle of linear superposition of light wavesdoes not hold anymore. Two laser beams crossing in a suitable material may produce a set of new beams with different directions and frequencies. The interaction of light waves can be understood by considering the optical grating structures which develop in the overlap region. The optical properties of matter become spatially modulated in the interference region of two light waves. Permanent holographic gratings have been produced in this way by photographic processes for many years. In contrast, dynamic or transient gratings disappear after the inducing light source, usually a laser, has been switched off. The grating amplitude is controlled by the light intensity. Dynamic gratings have been induced in a large number ofsolids, liquids, and gases, and are detected by diffraction, 'forced light scattering' of a third probing beam, or by self-diffraction of the light waves inducing the grating. The combined interference and diffraction effect corresponds to four-wave mixing (FWM) in the language of nonlinear optics. The process is called degenerate ifthe frequenciesofthe three incident wavesand the scattered wave are equal. Degenerate four-wave mixing (DFWM) is a simple method to achieve phase conjugation, i.e. to generate a wave which propagates time reversed with respect to an incident wave.