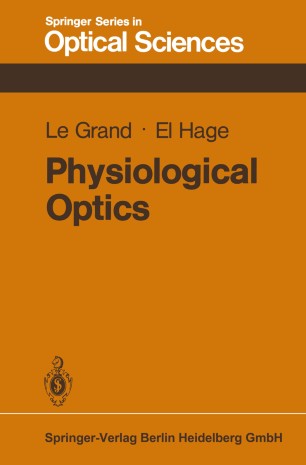 This book is a translation by Professor Sami El Hage of Volume I of Le Grand's three-volume treatise on physiological optics. It is the last of the three volumes to be translated into English. Le Grand's second volume was translated into English by Hunt, Walsh and Hunt and published in 1957 under the title Light, Colour and Vision. His third volume was translated into English by Millodot and Heath in 1966 and published under the title Form and Space Vision. Although Le Grand's three volumes have been compared to the three volumes of Helmholtz, it is important to note that Le Grand has distributed differently the topics in his three volumes. This book is a mixture of the tradition established by Helmholtz and followed by Tscherning and Sheard with the tradition originated by Danders and followed by Landolt and Laurance and others. Helmholtz's first volume was concerned with the image forming structure of the eye, almost without reference to practical problems of examining patients and fitting them with glasses. It dealt with the problems of a single eye.