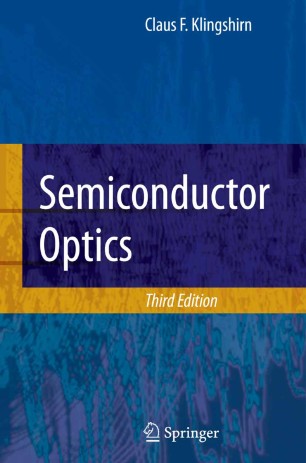 The second edition, which appeared in 2005 and contains substantial - dates and amendments compared to the ?rst one and its corrected reprints, was again favourably received by the students and the scienti?c community worldwide. Asaconsequence,thepresentthirdeditionbecamenecessary.Thechanges introduced are, compared to the sedond edition, more limited, among others because the time elapsed between second and third edition is much shorter than the time between ?rst and second one. The main chances concern the following points: The discussion about the density, at which an electron-holeplasma is formed, has been up-dated, in the section about photonic crystals a few comments on meta-materials have been added, several new and timely references have been included and some of the misprints have been removed. Karlsruhe, C.F. Klingshirn August 2006 Preface to the Second Edition The book on Semiconductor Optics has been favourably received by the s- dents and the scienti?c community worldwide. After the ?rst edition, which appeared in 1995 several reprints became necessary starting from 1997, one of them for the Chinese market. They contained only rather limited updates of the material and corrections. In the meantime scienti?c progress brought a lot of new results, which necessitate a new, seriously revised edition. This progress includes bulk se- conductors, but especially structures of reduced dimensionality. These new trends and results are partly included in existing chapters e.g. for phonons or for time-resolved spectroscopy, partly new chapters have been introduced like the ones on cavity polaritons and photonic structures.