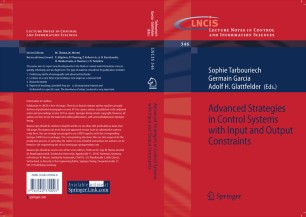 Advanced Strategies in Control Systems with Input and Output Constraints

Physical, safety or technological constraints induce that the control actuators can neither provide unlimited amplitude signals nor unlimited speed of reaction. The control problems of combat aircraft prototypes and satellite launchers offer interesting examples of the difficulties due to these major constraints.

Neglecting actuator saturations on both amplitude and dynamics can be source of undesirable or even catastrophic behavior for the closed-loop system (such as loosing closed-loop stability).

Such actuator saturations have also been blamed as one of several unfortunate mishaps leading to the 1986 Chernobyl nuclear power plant disaster. For these reasons, the study of the control problem (its structure, performance and stability analysis) for systems subject to both amplitude and rate actuator or sensor saturations as typical constraints has received the attention of many researchers in the last years.

The different techniques described throughout the book are particularly attractive for industrial applications not only in aeronautical or space domains but also in the context of biological systems domain. Such methods are well suited for the development of tools that help engineers to solve analysis and synthesis problems in the context of control systems with input and output constraints