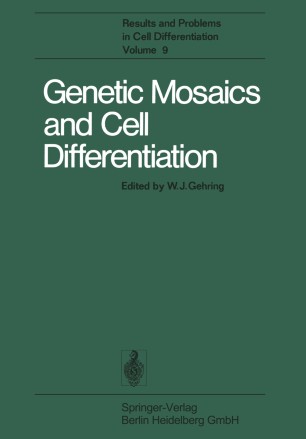 Part of the Results and Problems in Cell Differentiation book series (RESULTS, volume 9)

The relationship of cell lineage and differentiation is one of the most intriguing problems in developmental biology. In most higher organisms, the analysis of the cell lineage has to rely on indirect methods. Only in the most suitable systems, like the nematodes, can the pattern of cell division be determined by direct observation under the microscope. In cases where this is not possible, the fate of the cells has to be examined by using cell markers. Most suitable for this purpose are genetic markers, provided that they do not interfere with the developmental pathway to be studied. However, suitable genetic markers and techniques for generating genetic mosaics are available in a few organisms only. Therefore, this volume is largely concerned with Drosophila and the mouse, which have been studied most extensively. In 1929 STURTEVANT introduced the analysis of gynandromorphs into devel­ opmental genetics. However, this important contribution remained largely unnoticed until the late sixties, when the potential of this technique for deter­ mining embryonic fate maps and the number of primordial cells was exploited, and the methodology extended to the mapping of mutational foci. Mitotic recombination was demostrated by STER:-< in 1936, who realized the potential of this technique for the analysis of cell lineage and pattern formation. The usefulness of this method was substantially increased by the discovery of FRIESEN that mitotic recombination can be induced by x-irradiation. This allows the induction of mosaicism at any stage of development.