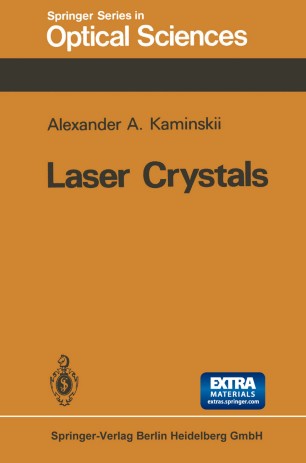 Their Physics and Properties

The greatest reward for an author is the feeling of satisfaction he gets when it becomes clear to him that readers find his work useful. After my book appeared in the USSR in 1975 I received many letters from fellow physicists including colleagues from Western European countries and the USA. Some of those letters, as well as official reviews of the book, made specific sug­ gestions for improving the book. The satisfaction I derived from all those kind and warm responses gave me the determination to continue work on the book in order to fulfill these wishes in the next edition. This possibility arose when one of the scientific editors from Springer-Verlag, Heidelberg, H. Latsch, who is the founder of the well-known series of quasi-monographs "Topics in Applied Physics", visited our Institute and suggested an English edition of my book. For all this, and for his subsequent help, I am sincerely thankful. I consider it my pleasant duty also to express my gratitude to the American physicist H. F. Ivey, who served as scientific editor of the trans­ lation. The English version of the book retains the structure of the Russian edition, though it is supplemented with many new data in the tables and figures. It reflects trends in the development of the physics and spectroscopy of laser crystals in recent years.