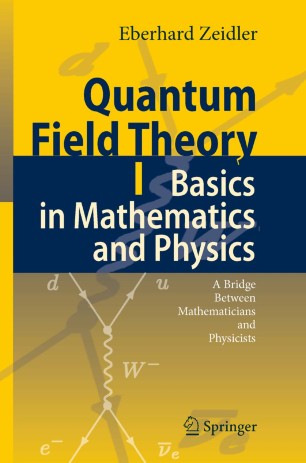 Quantum Field Theory I: Basics in Mathematics and Physics

A Bridge between Mathematicians and Physicists

This is the first volume of a modern introduction to quantum field theory which addresses both mathematicians and physicists ranging from advanced undergraduate students to professional scientists. The book tries to bridge the existing gap between the different languages used by mathematicians and physicists. For students of mathematics it is shown that detailed knowledge of the physical background helps to motivate the mathematical subjects and to discover interesting interrelationships between quite different mathematical topics. For students of physics, fairly advanced mathematics is presented, which is beyond the usual curriculum in physics. It is the author's goal to present the state of the art of realizing Einstein's dream of a unified theory for the four fundamental forces in the universe (gravitational, electromagnetic, strong, and weak interaction).

"… Quantum field theory is one of the great intellectual edifices in the history of human thought. … This volume differs from other books on quantum field theory in its greater emphasis on the interaction of physics with mathematics. … an impressive work of scholarship."

"… it is a fun book for practicing quantum field theorists to browse, and it may be similarly enjoyed by mathematical colleagues. Its ultimate value may lie in encouraging students to enter this challenging interdisciplinary area of mathematics and physics. Summing Up: Recommended. Upper-division undergraduates through faculty."