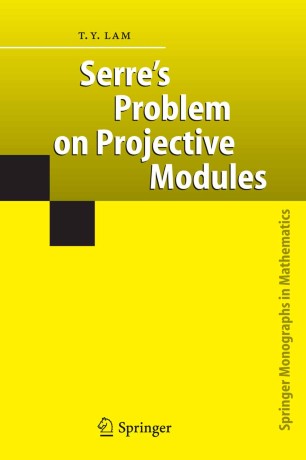 “Serre’s Conjecture”, for the most part of the second half of the 20th century, - ferred to the famous statement made by J. -P. Serre in 1955, to the effect that one did not know if ?nitely generated projective modules were free over a polynomial ring k[x ,. . . ,x], where k is a ?eld. This statement was motivated by the fact that 1 n the af?ne scheme de?ned by k[x ,. . . ,x] is the algebro-geometric analogue of 1 n the af?ne n-space over k. In topology, the n-space is contractible, so there are only trivial bundles over it. Would the analogue of the latter also hold for the n-space in algebraic geometry? Since algebraic vector bundles over Speck[x ,. . . ,x] corre- 1 n spond to ?nitely generated projective modules over k[x ,. . . ,x], the question was 1 n tantamount to whether such projective modules were free, for any base ?eld k. ItwasquiteclearthatSerreintendedhisstatementasanopenproblemintheshe- theoretic framework of algebraic geometry, which was just beginning to emerge in the mid-1950s. Nowhere in his published writings had Serre speculated, one way or another, upon the possible outcome of his problem. However, almost from the start, a surmised positive answer to Serre’s problem became known to the world as “Serre’s Conjecture”. Somewhat later, interest in this “Conjecture” was further heightened by the advent of two new (and closely related) subjects in mathematics: homological algebra, and algebraic K-theory.