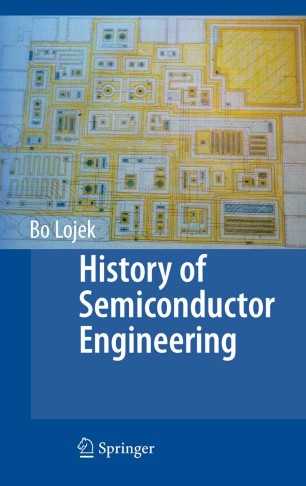 When basic researchers started working on semiconductors during the late nineteen thirties and on integrated circuits at the end of the nineteen fifties, they did not know that their work would change the lives of future generations. Very few people at that time recognized the significance of, perhaps, the most important invention of the century. Historians have assigned the invention of integrated circuits to Jack Kilby and Robert Noyce. In this book, the author argues that the group of inventors was much larger. This richly illustrated account is a personal recollection of the development of integrated circuits and personalities – such as Russell Ohl, Karl Lark-Horovitz, William Shockley, Carl Frosch, Lincoln Derick, Calvin Fuller, Kurt Lehovec. Jean Hoerni, Sheldon Roberts, Jay Last, Isy Haas, Bob Norman, Dave Allison, Jim Nall, Tom Longo, Bob Widlar, Dave Talbert, Frank Wanlass, and Federico Faggin. Here is the first comprehensive behind-the-scenes account of the history of the integrated circuit, the microelectronics industry, and the people closely involved in the development of the transistor and the integrated circuit.

"Your book is going to make a major contribution to semiconductor history. You and I agree that, while the world loves a hero, semiconductor progress depended on the efforts and ideas of a large number of people, and that moving forward depended on contributors going back a few decades in some cases. Also, as is the case with most inventions, a number of people with access to the same pool of common knowledge were working independently at the same time to put it all together and to make the necessary extensions to the existing technology and who realized that the time was right for society to accept the new concepts. Your diligent research points all of this out."

"Bo Lojek presents a remarkable document of the most important and significant technical development of our times. He describes in astounding detail the engineering efforts of modern microelectronics. He concentrates on the history of silicon semiconductor devices. California’s "Silicon Valley" is the center of attention, together with its ancestry of transistor invention at Bell Laboratories. He has collected a wealth of illustrative documentation, gives incisive insight into the lives of the main actors and shows the often tragic fates of the engineers and businessmen. He does not hide his firm belief in the individual engineer and warns of the retarding influence of present-day political correctness."

"The technical history of the semiconductor history rivals the 1849 California Gold Rush as a period filled with excitement and opportunity. Although I cannot first hand validate its complete accuracy, I enthusiastically encourage you to read the collected facts, opinions, and views of an author who was actually part of this amazing period, viewing it as a successful practicing Engineer during this "gold rush" - like hey-day of the semiconductor industry.

For educators and technologists you will find this collection of data, facts, and opinions, collected and observed first hand by the author, fascinating! It is a tough read for others due to the writing experience of the author and its technical focus."