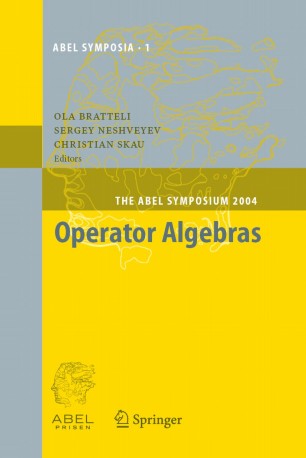 The theme of this symposium was operator algebras in a wide sense. In the last 40 years operator algebras has developed from a rather special dis- pline within functional analysis to become a central ?eld in mathematics often described as “non-commutative geometry” (see for example the book “Non-Commutative Geometry” by the Fields medalist Alain Connes). It has branched out in several sub-disciplines and made contact with other subjects like for example mathematical physics, algebraic topology, geometry, dyn- ical systems, knot theory, ergodic theory, wavelets, representations of groups and quantum groups. Norway has a relatively strong group of researchers in the subject, which contributed to the award of the ?rst symposium in the series of Abel Symposia to this group. The contributions to this volume give a state-of-the-art account of some of these sub-disciplines and the variety of topics re?ect to some extent how the subject has branched out. We are happy that some of the top researchers in the ?eld were willing to contribute. The basic ?eld of operator algebras is classi?ed within mathematics as part of functional analysis. Functional analysis treats analysis on in?nite - mensional spaces by using topological concepts. A linear map between two such spaces is called an operator. Examples are di?erential and integral - erators. An important feature is that the composition of two operators is a non-commutative operation.