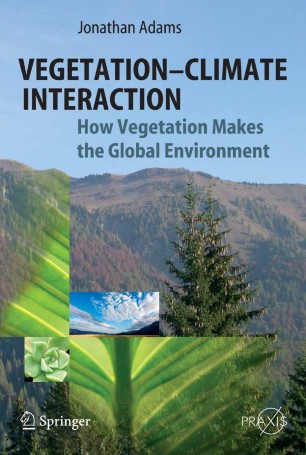 How Vegetation Makes the Global Environment

I had wanted to write something like this book for many years, but would probably never have dared to attempt it unless I had been asked to by Clive Horwood at Praxis Publishing. As it is, this has been a rewarding experience for me personally, something which has forced me to read literature that I would not otherwise have read, and to clarify things in my head that would have remained muddled. What I have set out to do here is provide an accessible textbook for university students, and a generalized source of current scientific information and opinion for both academics and the interested lay reader. I have myself often found it frustrating that there have been no accessible textbooks on most of the subjects dealt with here, and I hope that this book will fill the gap. My friends and colleagues have provided valuable comment, amongst them David Schwartzman, Axel Kleidon, Alex Guenther, Ellen Thomas, Tyler Volk, Ning Zeng, Hans Renssen, Mary Killilea, Charlie Zender, Rich Norby, Christian Koerner and Roger Pielke Sr. I could not stop myself from adding to the manuscript even after they had sent me their careful advice, and any embarrassing errors that have slipped through are of course a result of my doing this. I am also very grateful to everyone who has generously given me permission to use their own photographs as illustrations in this book, and I have named each one in the photo caption.

Jonathan Adams has a very diverse background in the environmental sciences, including biogeography, classical ecology, Quaternary geology and earth system science. He has published in international journals on all of these topics and collaborated with some of the best known scientists in these fields. He has also organized meetings and edited special issues of journals on earth system science. Thus, he has the inter-disciplinary knowledge necessary to tackle a subject as far-reaching and many-faceted as vegetation-climate interactions, on a range of spatial scales and time scales.

"Vegetation-Climate Interaction is a wonderfully simple yet elegant treatise on how vegetation patterns are closely linked to the global environment. … The book is liberally laced with useful figures and photos that contribute greatly to making the complex topics understandable. All in all, this volume is likely to become a staple for both the vegetation and climate change communities, and for meteorologically oriented scientists. It would be a perfect primer for qualifier exams in these fields. Summing Up: Highly recommended. All levels." (D. F. Karnosky, CHOICE, Vol. v4 (3), November, 2007)