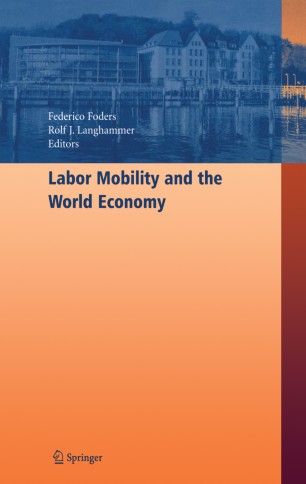 Labor Mobility and the World Economy

An increasing number of landings of illegal migrants on the coast of Italy and Spain, but also the recent riots, car-burnings, and street battles that occurred all across France and that have been attributed to the migrant community, seem to indicate that migration is likely to stay high on the European policy agenda for some time. The flow of migrants from poor to rich countries does not, however, constitute a typically European problem. V. S. public policy has also been facing a continued (legal and illegal) inflow of labor from different regions, notably Mexico and other Latin American countries. And similar developments in other advanced countries (Australia, Canada) as weil as in selected fast-growing emerging markets in Eastern Europe and East Asia imply that these countries too are being compelled to adjust their public policies in order to relieve migratory pressures and deal with their consequences. The world economy already saw rising cross-border labor flows in the 1990s and most forecasts predict that South-North and South-South migration will re­ main at relatively high levels over the next decades and possibly even turn into a major global challenge for policy makers in the 21st century.