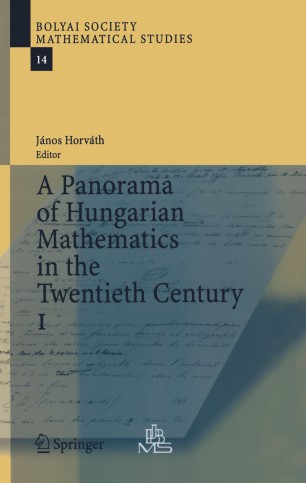 A Panorama of Hungarian Mathematics in the Twentieth Century I

A glorious period of Hungarian mathematics started in 1900 when Lipót Fejér discovered the summability of Fourier series.This was followed by the discoveries of his disciples in Fourier analysis and in the theory of analytic functions. At the same time Frederic (Frigyes) Riesz created functional analysis and Alfred Haar gave the first example of wavelets. Later the topics investigated by Hungarian mathematicians broadened considerably, and included topology, operator theory, differential equations, probability, etc. The present volume, the first of two, presents some of the most remarkable results achieved in the twentieth century by Hungarians in analysis, geometry and stochastics.

The book is accessible to anyone with a minimum knowledge of mathematics. It is supplemented with an essay on the history of Hungary in the twentieth century and biographies of those mathematicians who are no longer active. A list of all persons referred to in the chapters concludes the volume.